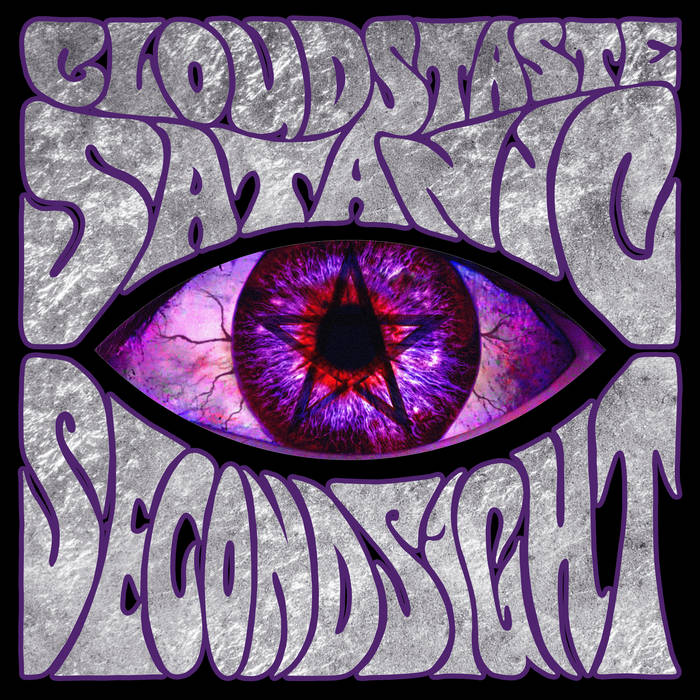 DoomWitch Dark Overlords of instrumental doom are back, again. And they've pushed the evil awesomeness to 11 in this release. The heavy riffage is, of course, omnipresent, but the drums, guitar licks, space vibe, and time changes really come in stronger. Their best yet. Favorite track: Black Mass.

r_drysdale CTS is one of those instrumental bands where when you listen to their music, you don't even notice that their is no vox. The music is so full bodied with so many textures that it sounds complete without them. Heavy, psychedelic, stoned-out, face melting music that is so well executed. Do yourself a favor, if you don't know Clouds Taste Satanic than now is the time to take a taste with the release of Second Sight. Favorite track: Black Mass.

Rhett Huebschmann What do you do if your Clouds Taste a little Satanic? Add riffs. Lots and lots of riffs. Bring out that yummy Satanic goodness!
more...

"Clouds Taste Satanic is a band that never ceases to amaze me. Everything about them gets more captivating with each record they release. Their music is an audio banquet that I need to taste all of. Their visuals rip you from reality into a Dali-esque dream world. Their new record, Second Sight, comes out on October 31st, and it’s taken them to new heights of psylocybin-infused doom bliss. The video they recently released for [part of] the title track is an absolute eye-fuck in the best possible way. I don’t want this trip to ever end!"

"Combined all together, Clouds Taste Satanic have created sprawling soundscapes of doom. Maybe spacescape is a good word for this kind of jam. It’s the kind of music that you could set to a science fiction or fantasy scene, but allows the listener’s mind to paint the picture. The absence of lyrics gives you control of the narrative."

"We usually get one release from a band every few years as we all know with that being the typical case that we almost always find ourselves in. But, it’s every now and then that we get a little spoiled as fans. Some bands aren’t content with just one release appearing in a given year and they come back around for another round, sometimes even more. While I’d love to have gotten even more out of Clouds Taste Satanic this year, I’m more than ecstatic to have gotten two albums from them with only six months separating them. “Evil Eye” was a grand entry into the already stellar catalog that they’ve made for themselves over the past few years and it remains one of my favorite pieces this year will have thrown at me by the time we come to its end, but it’s single-handedly with the round two that is “Second Sight” that we have gotten what I believe to be some of the best material from Clouds Taste Satanic, if not their best."

"Brooklyn based post doom instrumental band Clouds Taste Satanic return for the second time this year with their latest release Second Sight. I really love when a band just keeps on working hard that they can produce an equally delicious second offering in one year's time.
Second Sight proves to be equally hypnotic as a follow up to April's Evil Eye (go take a listen, you'll love it). The title track is perfect for an evening like today, sitting on my porch amidst the autumn leaves falling all around me, crisp delicious cool air, only the flicker of my Halloween lights as I delve deep into this album. I am visited by the ghosts of Jimi Hendrix, Janis Joplin, traveling the road of 60s psychedelia eventually arriving at the door of the 70s, Cream, Sabbath. Oh the beautiful comforts of this album as it touches all the roots of what would flow into the rock and metal of today. I always enjoy spending time with Clouds Taste Satanic. They further prove that vocals are not necessary to deliver you to a soothing realm."

"Each of the three parts of the song Second Sight is a glorious celebration of the riff; with other elements such as dark psychedelia, spacey interludes and enormous endings thrown in for added effect. Personally, I don’t listen to this while trying to pick out the sections listed; I tend to listen to songs as a whole instead of separating it piece by piece. This entire song is exactly what I love about C.T.S., riffs of doom inspired power, technical songwriting, and sheer musical prowess. I know a lot of people think that doom, stoner, etc., are easy to play, but that’s far from being true, because there’s nuances, and additional elements that will separate the good bands from the copycats; Clouds Taste Satanic is no copycat, wannabe, bullshit music, it’s the best instrumental music you’ll ever hear from this genre."

"Bullet points and outline structure notwithstanding, what Clouds Taste Satanic do over the course of these pieces is bring together a progressive take on heavy riffing that’s both of doom and willing to look outside it when called for. Past its halfway point, “Second Sight” turns to a swaggering bluesy swing for just a moment and the resulting impression is that not only are there multiple parties contributing to the songs — something I don’t know for sure, so don’t quote me on it — but that their interest lies in building a sonic complexity to match that of their structural presentation. Do they get there? Yeah, I think they do. It’s subtle, but as “Second Sight” shifts into what would seem to be its final movement with a sleeker, bass-led section of brooding, the build that ensues is both effective and accounting for the piece as an entirety as well as its own movement. The payoff, in other words, more than justifies the journey to it, and as “Black Mass” crashes in to start the second leg of Second Sight, the momentum has hardly subsided, carrying through a patient unfolding toward some classic stonerly fuzz-wah lead work and plays back and forth in tempo and roll as (perhaps) ‘The Demon (Star)’ takes hold amid more driving fare in the middle third of the track, eventually giving way to long crashes and dueling leads, post-Sabbath starts and stops and a long fadeout that has a due dirge vibe given the progression still underway. At two songs/42 minutes, it’s not a minor undertaking, but it’s clearly not supposed to be, and Clouds Taste Satanic live up to the weighty goals they’ve set for themselves, practically in terms of making two records in a year and creatively in terms of crafting something forward-thinking at the same time as it is heavy, doomed and all that other vibed-out stuff that essentially means “heavy” and “doomed.”

OUTLAWS OF THE SUN:

"Clouds Taste Satanic show you how exciting Instrumental Rock/Music can be and move the genre into new exciting grounds that you just don’t get with other Instrumental Doom/Stoner Metal bands. Clouds Taste Satanic are clearly at the forefront of the genre now. The band know when to bring the heavy riffs to the party and when to hold back which helps build up an exciting atmosphere."

"We’re lucky that 2019 brought us more then eighty minutes of new Clouds Taste Satanic song material. Their bad ass groovy compositions are a pleasure to get lost in and make you forget about everything else. If you think that instrumental music is boring or faceless you obviously haven’t listened to Clouds Taste Satanic yet. Go check them out if you have not already."

"Clouds Taste Satanic specialize in producing epic music laden with all the riffs and lung liquidising low end chords beloved of the followers of Doom, and yes, the capital “D” is required here, but rather than pander to commercialism with such fripperies as lyrics and songs a mere seven to eight minutes long, the band drown the listener in twenty plus minutes long tsunamis of musical excellence, ‘Second Sight’ being no different, composed as it is of just the title track and the equally epic ‘Black Mass’. A companion to this year’s Walpurgis Eve released ‘Evil Eye’, and arriving in time for Old Hallow’s Eve, ‘Second Sight’ continues seamlessly on in providing a sonic accompaniment to evil goings on, hypnotic looping beats and pulse raising bass lines drawing the listener in, exhorting them to join in a primal stomp, the dance being conducted by the darkly clad pied piper notes of the guitar, leading you on a journey into the ceremony of the music."

"In General lines, little summary can be done to these two long tracks that make up their new album, beyond that excellence and great dynamism that have led these musicians to a state of overcoming worthy to reign among the best of the year in their Category. LED by those penetrating bass lines and those heavy riffs dressed in dark, here they lengthen their resonances by the abysmal echo. A Compendium of underscores as subtle, as melancholy, of perspectives as apocalyptic as visionary. In a world where progressive is made with a certain dissimulation, the instrumental excellence of clouds taste satanic can give a rodeo for the great classics of the genre, as well as serve master lessons for young bands. A bridge where decades and decades of stocks, legacies and variations to the heavy field pass, clouds taste satanic cross the same with a practically cinematic approach, but above all, spectacular and many stimuli to wake up in any of their listening. I have no doubts, for me it's one of the bands of the year."

"There are a myriad of bands out there travelling the instrumental highway but none come close to replicating what Clouds Taste Satanic bring to the table with their particular brand of instrumental post-doom and lysergic metal. We at Desert Psychlist thought it would be damn hard for the band to better their previous EP "Evil Eye", such was its sonic impact and high levels of writing and musicianship, but CTS have proved us wrong and with "Second Sight" the band have raised the bar to whole new level"

Bandcamp Daily  your guide to the world of Bandcamp