Dawn of The Satanic Age 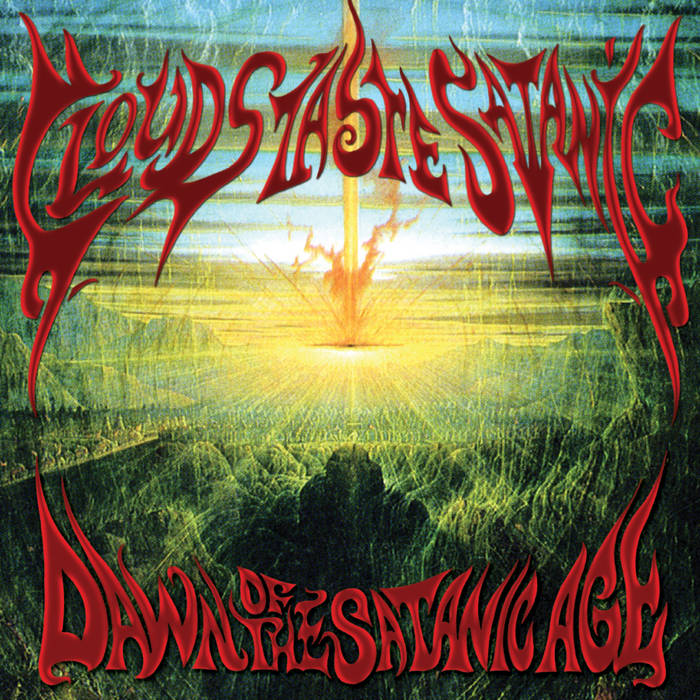 Doomlobbyn Once more Clouds Taste Satanic puts out an excellent album. While I miss the structural cohesiveness of To Sleep Beyond the Earth there is nothing stopping you from listening to Dawn of the Satanic Age as one long song. Instrumental stoner at it's finest. Favorite track: Retribution.

"Excuse me as I hold on the wings of DOOM that have me soaring so HIGH! My mind has been taken to another realm of reality where CLOUDS TASTE SATANIC rule the universe. These Brooklyn riff merchants are back with a new LP called Dawn Of The Satanic Age and it’s just as cosmic as their last two LPs, Your Doom Has Come and To Sleep Beyond The Earth. CLOUDS TASTE SATANIC’s music is vocal free, but you never feel like their songs are lacking in any way. Actually, because there are no vocals I find that I can ride their riffs like a magic carpet!"

"Although still as heavy as a tanker carrying a shipment of mercury and as dense as a desert night, "Dawn Of The Satanic Age" sees CTS allowing little rays of light come shining through the doom."

"Clouds Taste Satanic's third full-length album will unleash itself like a sonic boom on September 27th. It will boost your mood and I assure you – get your body moving! Whether it will be physical movement, of at least your head, or a transcendental movement of your body to far away corners of your mind, you will be moved!"

"Whilst listening to the new record from Clouds Taste Satanic, I was subject to an aberrant occurrence. All at once, I found myself rhythmically nodding in an unhurried yet most deliberate fashion, concurrently reminded that I had not felt obliged to do so in quite some time. Visions of smouldering metronomes, charred subwoofers and craft beer haunted my mind.
There was only one conclusion to be drawn; the beast had surely risen from his bottomless pit, entering between the C3 & C4 cervical vertebrae and laid claim to what autonomous motion my body possessed. As each infernal refrain came and went, it became clear to me that instrumental doom metal is the mechanism by which the ruler of demons is summoned, the one true call that Belial heeds.
As 'Demon Among the Stars' reached a crescendo, I calmly advised several concerned witnesses to abort the vicar's arrival, put away the holy water and stop wasting salt. For you see, I had been a willing participant all along, complicit in that profane communion! What's more, I was already planning to do so again. Confronted with such gloriously maleficent riffage, what damage could be done to my soul was of no consequence."

"Those and those in conclusion consider themselves lovers, or the sharp metal music, or the Sky rock sound, I suppose, that you love the essential approach of Clouds Taste Satanic in the most obscure points of abysmal heavy space as the magical and intoxicating Dawn Of The Satanic Age will seduce them with sinful stoner aura and enslave the mind and senses with the fairytale of doom lures. Almost irresistible."

"I really really like "Dawn of the Satanic Age" and all 6 songs are right up my alley when it comes to heavy riffs. The production is nice and thick like the hedgehog's flesh sausage and kinda reminds me of a little slower Black Tusk (nothing wrong with that). 'We die we live' and 'Just another animal' are my 2 favorites at the moment and 'Demon Among The Stars' is a great way to wrap up the album. They've gotten some great accolades and a nod from Decibel in 2014 with their 1st release 'Sleep Beyond The Earth', "I guess I was late to the party"! and the great reviews are rolling in across the board. There's still limited edition vinyl so go get some while they last! I know I am!"

"Clouds Taste Satanic are another band who show that doom and horror work so well together. Compared to their Italian brethren, they’re less likely to be found on a Dario Argento soundtrack, but are instead closer to that American 80’s cult film sound, they’re like Black Sabbath meets Uncle Acid and the Deadbeats in the middle of a Hammer Horror film. Without a doubt they have a place of honour on my summoning unholy abominations from the depths of the earth mixtape. Seemingly dedicated to pushing out an album every year, Dawn Of The Satanic Age is another stellar addition to an already impressive catalogue. Clouds Taste Satanic have managed to keep that horror soundtrack feeling fresh and their newest album also showcases audible growth and a willingness to innovate as a band. To summarize, Dawn Of The Satanic Age tempers that old Clouds Taste Satanic sound fans know and love with a tighter quality of musicianship and the maturity expected of a band on their third album. It has surpassed any expectations I had and I end with the best recommendation I can make; buy it."

"Whilst the shortest album they have produced so far, ‘Dawn Of The Satanic Age’ does not feel in any way brief or rushed, yet still demanding repeated replays to allow the listener to discover new depths amongst the tracks. What Clouds Taste Satanic have done once again without lyrics is to produce some of the most cinematic music since the heyday of Goblin, evoking images of terror and menace that cries out for a film to match it. One of my thoughts after the first listen through was that for years one of the reasons that cult classic horror The Keep has been stopped from getting a DVD or Blu-ray release is the trouble with obtaining the rights to the sound track of Tangerine Dream; I suggest an enterprising company should bypass that issue by commissioning Clouds Taste Satanic to produce a new score, a task they have proven with three straight albums in a row that they are more than up to the challenge of. Is there anything I don’t like about this album? Well, with 2016 running towards a close, it has made my job of selecting a top 10 of the year even harder now!
(9/10 Spenny)"

"Recommended for fans of the dramatic, the sinister and the severely heavy."

"Keeping true to form of earlier releases, Clouds Taste Satanic are foregoing any and all vocals to stick with what they know works and fuels wonder within listeners and fans of the band. A band which excels at creating groove-oriented and rhythmic driven soundscapes where ebb and flow audio pulls you along the waves of variance. Unique audio anomalies are the stock and trade of the Clouds Taste Satanic repertoire and that has never been more evident on such songs here as the opening salvo, “Enthroned“, with its chugging paces and hazy overtones. Others like “We Die We Live” or “Just Another Animal” are crushing examples of Progressive Doom that boldly build and then settle into myriad levels of intensity and vibrance that will leave you fascinated. The three remaining songs, “Retribution“, “The Brocken“, and “Demon Among The Stars“, will take that fascination and utterly amp it up to awestruck amazement upon their listening. Laden with ever changing degrees of energy and emotion, these stand-outs will stupefy your senses and make you a faithful believer that while Clouds Taste Satanic, they also feel divine on “Dawn Of The Satanic Age“."

“Dawn of the Satanic Age is more stripped down, more down-to-earth and more primal than Clouds Taste Satanic’s previous releases. Now, we’re invited to decent deeper still into the band’s twisted labyrinth of occultic symbolism and apocalyptic ideation. It’s a dense, heavy work, by there are righteous riffs aplenty. Songs like ‘We Die We Live’ will be replaying over and over in your mind days after your last listen. If you enjoy the way instrumental metal can stimulate the imagination and tell stories without ever uttering a word, place your bet on Dawn of the Satanic Age. It’s a keeper.”

"Their first release To Sleep Beyond The Earth is still on heavy rotation over here. The way they manage to invoke a certain atmosphere on that record, a sense of dread and the coming of something malevolent is simply stunning. The New York quartet Clouds Taste Satanic continued that streak with the follow-up Your Doom Has Come, which was definitely a more laidback almost catchy approach to their evil trumpet call kind of music. And now they are back with a third installment: Dawn Of The Satanic Age. If ever there was a trumpet call title, this is it of course. On it, they seem to continue to strip their music down to its most primordial self. Doom as doom should be. Instrumental rock that worships the riffs, the groove and the slow march. But even if the title hints at darkness, death and decay, there is an abundance of lighter compositions on this third record. They have always managed to put more breathing room, air and a brighter feeling into their wicked arrangements. But this time around they give it that extra punch, that extra sharp edge. Which is ofcourse that more luscious of paradoxes. Evil, dark and a bit occult, yet full of air and almost elegant. Which is what good music thrives on. Even if it heralds the coming of the beast!"

"If the satanic age means stalking and radiation everywhere, the dawn is a coming, musicwise instru-metal symphony with riffsful of uniqueness, another example that the music interesting enough needs no vocals."

"Thanks to everything in-between and including "Enthroned" and "Demon Among The Stars" (with Side B's "The Brocken" the best thing that I've heard in AGES!), "Dawn Of The Satanic Age" is (as the British say) Damn Bloody Brilliant!"

THE PIT OF THE DAMNED:

"The Clouds Taste Satanic are right in the middle of all the doom and stoner music, old and new, illuminated by its own light, almost unreachable. We could never loudly proclaim them innovators but we can boast them with the name of regenerators of addictive super stoner riffs and vintage. To love or hate, no middle ground, no deserts or cactus but only Dante's hell. With Dawn of the Satanic Age, in my humble opinion, the CTS can aspire all'onorificenza maximum cult band of excellence, a real satanic temptation!"

GRIND ON THE ROAD:

"The excellent artwork and the yield of the vinyl version, which creates a real wall of sound, make Dawn Of The Satanic Age a pearl underground dripping blood. For fans of the genre a must buy."

"This is their best work to date. They continue along the same path as their predecessors, only with better sound and a more refined style."

"Dawn Of The Satanic Age appears as a new advance for artists who have understood that to define oneself and to question oneself is inseparable from a healthy evolution. As always, Clouds Taste Satanic caress the aficionados of the physical format. A sturdy gatefold limited to 250 pieces that opens on Gustave Doré, and a coloration of red, green and yellow for a remarkable result of infernal fog."

"While there's fun in comparing the albums to each other, CTS have also made an album which stands strongly on its own, especially with the stylish closing of “Demon Among the Stars”. If this is your first encounter with the band, check it out already; if you've heard their earlier albums, there's still surprises in store for you."

"These guys broke the mold on instrumental stoner doom! Their sound is crushingly hellacious and powerful, not to mention their approach is uncompromisingly obliterating with just the perfect pitch!"

Bandcamp Daily  your guide to the world of Bandcamp